Dr. Stephanie Cherqui has previously shown that if you transplant hematopoietic stem cells (HSCs) into cystinosis mice, you get stem cell engraftment with reduction in cystine in the tissues and preservation of organ function.  She is currently working on safety studies so that we can move forward with human trials with autologous HSC transplant for patients with cystinosis.

But how do the stem cells actually fix the cystinosis cells?  Dr. Cherqui and her lab recently published a paper in Stem Cells revealing the mechanism.  Several hypotheses had been suggested.  Do the stem cells turn into new kidney cells, or do they fuse with the diseased cells to create a functioning hybrid?  It turns out it’s neither. 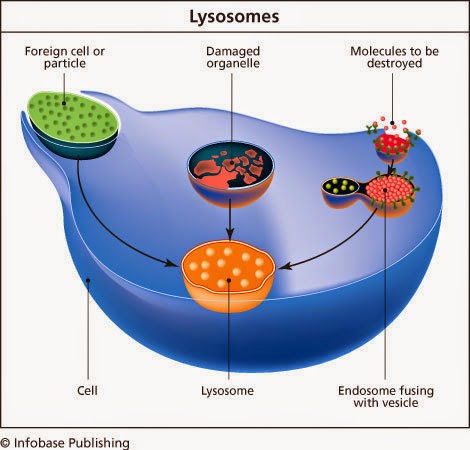 First you have to remember that cystinosis is a disease of the lysosome.  The lysosome is like the recycling plant of the cell.  It takes up old proteins, digests them into amino acid building blocks, and spits them out through transporter pumps to be reused.

Cystinosin is the transporter that pumps out cystine, and if it is broken, like it is in cystinosis, then the cystine can’t get out of the lysosome. Cystine builds up, damaging the lysosome and the cell. Cystinosin is probably involved in a lot of other cellular functions too, which explains why giving people cysteamine doesn’t cure cystinosis.  You can’t just get rid of cystine; you have to replace the Cystinosin transporter somehow.

Dr. Cherqui showed that most of the stem cells turn into macrophages after transplantation.  Macrophages are a type of immune cell, and their name literally means “big eater.” Macrophages like to munch on bacteria, and they also clean up the big mess made by the other immune cells that are fighting viruses and bacteria.  Since the macrophage is designed to clean up, it has lots of LYSOSOMES!

In the movie below, posted with Dr. Cherqui's paper in Stem Cells, you can actually see the lysosomes (the little green dots) leaving the macrophage through the tunneling nanotubules to the cystinosis cells, which are red.  So cool!

This research could have big implications for other diseases.  Cystinosis is just one of fifty lysosome disorders.  Other lysosome disorders include Tay-Sachs disease, Fabry disease, Niemann-Pick disease, Gaucher disease and metachromatic leukodystrophy.  What if HSC transplantation could swap out the broken lysosomes in these diseases?  It's also interesting to note that lysosomes aren't the only organelles that move across the tunneling nanotubules.  Dr. Cherqui and other researchers have also noted mitochondria making the trek.  Mitochondria are the "powerhouse" of the cell, where most of the energy required for cellular function is generated.  There are many mitochondrial disorders, and it is possible that HSC transplantation could be used to treat these as well.  The cure for cystinosis could be the cure for a whole host of genetic diseases!

How to Cure Cystinosis

I still remember in 2011 when Ashton came home from the Cystinosis Research Foundation Day of Hope conference and told me there was a scientist who had cured cystinosis in a mouse model with hematopoietic stem cell transplant.  Hematopoietic stem cells, or HSCs, are the stem cells in the bone marrow that develop into blood cells, including the red cells that carry oxygen, and the white cells that make up our immune system.  I had just finished my hematology block in medical school, and what Ashton was telling me sounded preposterous.  Bone marrow transplants are definitely effective for certain blood diseases like multiple myeloma and immunodeficiencies, but it didn’t make any sense that stem cells destined to become blood cells could repair damaged kidney, liver, muscle and thyroid tissue.  Boy, was I wrong!

The idea of curing a genetic disease like cystinosis with an allogeneic bone marrow or HSC transplant is pretty exciting.  But bone marrow transplants are not risk-free.   The biggest complication is graft-vs-host disease, where the transplanted bone marrow cells actually attack the recipient, leading to severe skin, liver and gastrointestinal disease.  You also have to kill the patient's bone marrow before transplant with chemotherapy, putting the patient at high risk for infection.  Thankfully Dr. Cherqui has found a way around this.

Rather than give the person with cystinosis someone else's hematopoietic stem cells, why not take some blood from the cystinosis patient and genetically modify the stem cells to express the correct Cystinosin genes, and then give them back as an autologous transplant?  This way you already have a perfect match.  You basically eliminate the risk of graft-vs-host disease, and you don't have to use the same intensity of chemo to suppress the bone marrow prior to transplant.  Sounds pretty great, huh?

In 2013, Dr. Cherqui published research showing she had found a way to deliver the correct Cystinosin gene to stem cells with a virus, specifically a lentivirus.  The virus goes into the cell and copies its DNA, including the correct Cystinosin gene, into the stem cell's DNA.  The stem cells were then transplanted back into the mice from which they were taken, and these cystinosis mice had the same reduction in cystine and organ preservation as the mice that got allogeneic HSC transplantation.


With these amazing results, Dr. Cherqui has now moved toward clinical trials in humans, and is currently working on safety studies for the FDA.  Hopefully in the next few years there will be a trial for autologous HSC transplant in actual patients.  All of this is possible because of the Cystinosis Research Foundation, who has funded Dr. Cherqui's research.  We are so grateful for Dr. Cherqui's tireless dedication. I won't be surprised when she wins the Nobel prize. The cure is coming!