This movie is from the day Sam started saying "daddy." We tried to catch it on film but all he would do is growl.

Here is a random selection of photos from the last couple months as well: 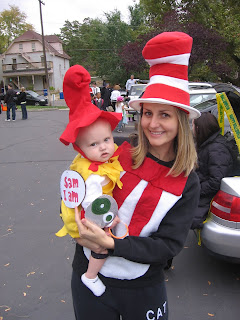 Here's "Sam I am" at the ward trunk-or-treat. 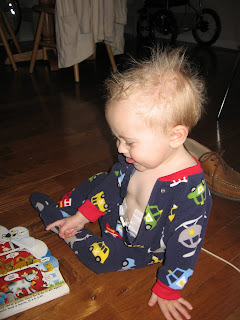 Here's Sam first thing in the morning. He always has great bed head, and the first thing he wants to do is read. 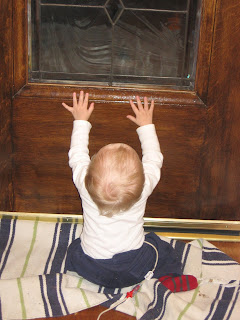 Whenever I ask Sam if he wants to go see Tallinn, his two-year old friend next door, he books it to the front door. Puppy love. 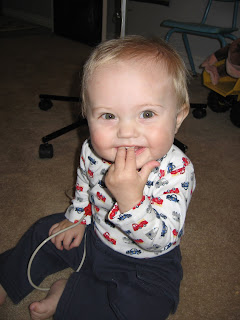 This is just a charming photo.
Posted by stevesie at 9:08 AM 4 comments:

Sam is now 29 inches! He had an appointment with Dr. Ralston on Monday (best pediatrician ever) and his growth chart shows him in the 5th percentile for height. We are just stoked that he is back on the growth chart! He hasn't been for the last six months or so. He's still off the chart for weight, at 17 lbs 13 oz., but he has gained about three pounds since he got the g-tube (he's always been at least in the 50th percentile for head size, which with his body size means he's got a HUGE noggin). Dr. Ralston says he is definitely behind on muscle mass, so we're going to start meeting with a physical therapist through Early Intervention to figure out what exercises we can do with him.

He had some X-rays taken a week ago that showed he might have rickets in his wrists, but Dr. Mauch thought the X-rays were poor quality and probably not definitive. We doubt he has rickets anyway because he is supporting his own weight very well while standing, and he's been pulling himself up a lot.

Sam said "kitty" the other day, making it his official second word (after daddy). We got him to say it on film once. Although it's not the best enunciation, it's pretty dang awesome.

I have my suspicions that he's trying to say the word fish too, but it comes out more like "shiss." He says it when he points at Dorian, his goldfish, however.
Posted by stevesie at 5:57 PM 7 comments: