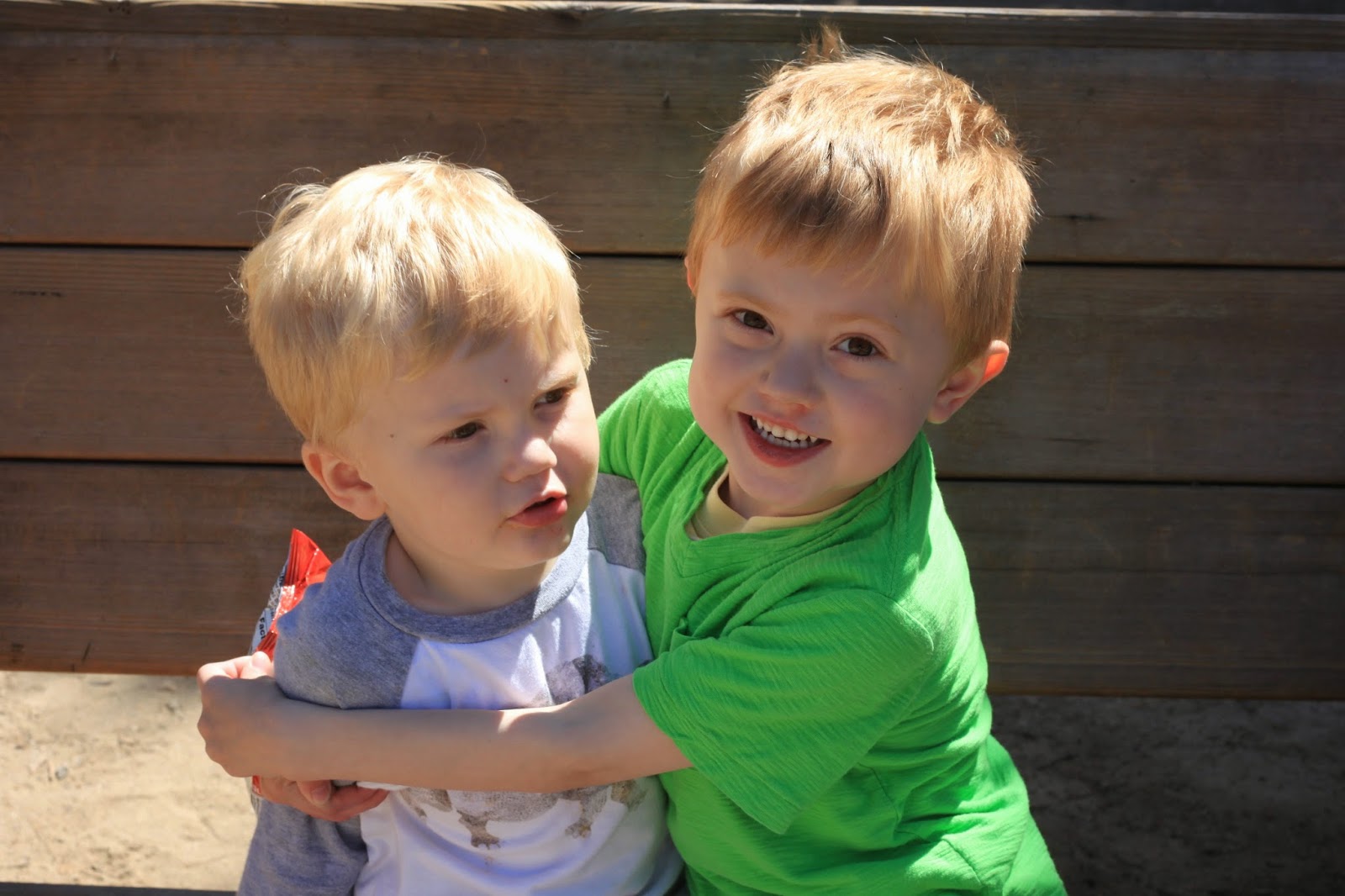 We had a nephrology appointment for Samuel and Lars today.

Lars's portion was very quick.  His kidneys still show no sign of Fanconi syndrome, and his growth trajectory has stayed in the 90th percentile.  He's gaining on Sam in weight pretty quickly.  He was excited to show the doctor the g-tube button I drew on his tummy last night.  Early diagnosis is huge!

Sam's portion was lengthy, to say the least.  A lot has happened.  Sam got two doses of rituximab, a week apart, the beginning of April.  Then we went to Newport Beach, CA for family vacation and the Cystinosis Research Foundation family conference the third week of April.  Sam had a cough and runny nose when we drove to California, and seemed to be more tired.  We went to Disneyland on that Tuesday, and that totally wore him out by about 3 PM.  He refused to walk anymore and slept in his stroller from about 4 PM to 8 PM while Lars continued going on rides.  That night he vomited multiple times and had trouble keeping his potassium and citrate down.   On Wednesday we slept in and Sam didn't feel well.  He rallied for an afternoon at Laguna Beach with his best buddy Henry Sturgis, but afterwards he was too sick to eat dinner with us.  We thought that he was just exhausted from a busy vacation with lots of days in the hot sun.

That night we met up at the Balboa Bay Resort for the CRF welcome dinner.  He was surrounded by so many old friends, including Henry and Jackson, that he forgot he was sick and went wild.  Friday was the first day of meetings, so we dropped Sam and Lars off at the babysitters, which is Sam's absolute favorite thing (more than Disneyland!).  He said he didn't feel well, and instead of joining in on the fun and games, he sat by the television.  When we went to pick him up he told us his right wrist was hurting, and he refused to move his right arm.  He had pain with walking too, especially on the right side, and had to be carried.  He spent Friday night wrapped up in a blanket, sitting in the stroller, instead of playing on the beach. Henry came and checked on him lots of times to see how he was doing.  He is such a good friend.  When we brought Sam back to the hotel he was in agonizing pain in his right wrist and wouldn't walk because his legs hurt. 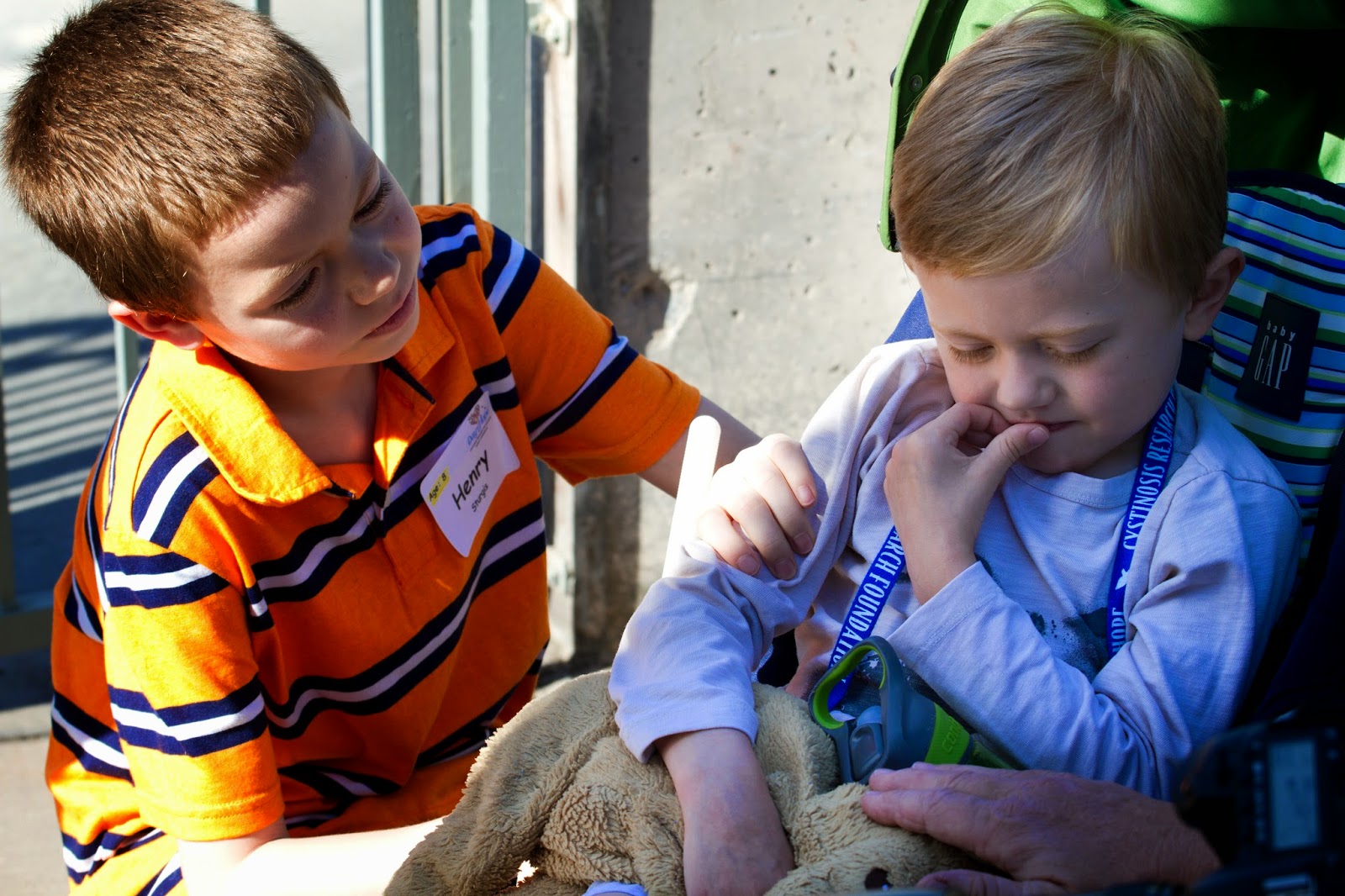 We called our nephrologist back home who thought it sounded like a viral infection.  He recommended supportive care.  We let him sleep in on Saturday morning, hoping some more rest would help.  His wrist was still very painful that morning, and he was acting really sluggish.  Ashton called our nephrologist again, and he became more concerned that this was a possible drug reaction.  He recommended that we take him to a hospital in California to be seen by a doctor.  We knew this carried the risk of him being admitted to the hospital there.  Luckily we were at a conference with many doctors, including Dr. Grimm, who used to see Sam in the RP103 trial.  Dr. Grimm was very kind to evaluate Samuel.  He was concerned that Sam had a reactive arthritis, that could be viral, or it may have something to do with Sam's prednisone taper.  He recommended going back up to 30 mg of prednisone and then driving back to Utah to be seen at Primary Children's.  We agreed that this was probably the best plan so with very heavy hearts we left the conference early to head home.

Sam threw up a lot on the way home, but eventually it stopped.  His wrist stopped hurting too, and suddenly he wanted to eat again.  I think lots of prayers were answered that day.  We made it back in 10 hours.  We went to Primary Children's, and fortunately Sam's nephrologist was there rounding.   Sam's potassium was low, but our nephrologist didn't think he needed to be admitted, especially since his wrist was looking better.  We had been holding Sam's lisinopril because of dehydration, so the protein in his urine had shot up pretty high again.  We went home and hydrated Sam with lots of pedialyte.

We were lucky Sam didn't have to be hospitalized.  We continued him on prednisone 30 mg for a total of 5 days, and then tapered down by 5 mg every couple days.  We had to re-live all the tantrums and mood lability again, but his other symptoms improved and he was able to go back to school.  We've tapered him down to 5 mg daily right now, and this doesn't make him too cranky.

At today's visit, Sam's growth has plateaued.  We might have to supplement with tube feeds again, but for now we'll keep monitoring.  His potassium is still pretty low, so we had to go up on that today.  He was on 20 mEq four times a day (a lot!) and now he'll be on 27 mEq four times a day.  Dang that Fanconi's syndrome.  His bicarbonate and phosphate are normal and his glomerular filtration is good.  His albumin has normalized too, which is a good sign.

Whether rituximab will lead to disease remission remains unclear.  If Sam continues to have the same level of inflammation in his kidneys and protein in his urine, his kidneys will start to decline, and he would need a kidney transplant in 1-2 years.  That's a scary thought, but even more scary is the notion that kidney transplant isn't necessary curative for this condition.  If the antibodies are still around, they will attack the donor kidney too.  So we really need to get rid of those antibodies.

Dr. Cherqui's strategy to cure cystinosis is to take hematopoietic stem cells from the patient, modify them with gene therapy, and then transplant them back.  In this process, the patient's bone marrow has to be eradicated with chemotherapy before the autologous transplant.  I've been musing about whether this could cure Sam's membranous nephropathy too.  Get rid of the immune cells, including the plasma cells that are making the culprit antibodies, and then transplant back healthy, undifferentiated stem cells, that would grow up to be responsible, kind immune cells, with nothing against Sam's kidneys.  I actually found a small series where autologous stem cell transplant was tried in 12 patients with treatment-refractory membranous nephropathy.  Patients did have an initial significant reduction in the level of protein in their urine, but it didn't last.  The big difference, however, is they did not have bone marrow eradication prior to transplantation, so the bad guy immune cells were still hanging around.  It makes me think that Dr. Cherqui's human trials can't come soon enough.

There was one glimmer of hope today.  When Sam was first diagnosed with membranous nephropathy, his albumin/creatinine ratio was over 14,000 (that's crazy high).  The lowest we could get it with prednisone and lisinopril was 4800.  Today it was actually down to 3600 g.  Not a complete response, but maybe the rituximab is working . . .